Swingers Club: A Survey of the Tennis Courts in Upper Manhattan

Where to Play Tennis in North Manhattan
by Oliver; 2014

Like riding the subway, navigating New York City's tennis system (if you can call it that) can be frustrating because it's poorly documented, obeys rules known only to insiders, and is subject to change without warning. One minute you're blithely hitting tennis balls; the next, a dyspeptic troll in a green uniform—in the person of a Parks Dept employee—is telling you to get the fuck off the court. This guide aims to illuminate the tennis scene in upper Manhattan, laying bare each court's peculiarities and unique tribal customs. In the silly uptown vs downtown debate in Manhattan, uptown almost always loses—but not in tennis! Despite this victory, the supply and demand equation is still harsh. According to this website, there are about a million people living in Inwood, Washington Heights, Harlem, plus the UES and UWS. So, for the 91 total courts given below, that's about 11,000 people per court!

A Comparison of Tennis Courts in Upper Manhattan


The Park's Dept has its own comparison table here.

As the Parks website says, "The Parks tennis season starts on the first Saturday of April and ends on the Sunday before Thanksgiving." Offseason you can play for free, although many courts take down their nets. For courts in the city park system—Central Park; Riverside Park, 96th St; Riverside Park, 119th St—you need a Parks Permit to play. Two exceptions to this rule are Inwood Hill Park and Fort Washington Park, which are apparently so far North (by Manhattan standards), that no one gives a rat's ass. Other courts, like The Dick Savitt Tennis Center, The Harlem Armory, and Riverbank State Park, are not part of the NYC Parks Dept and have their own rules.

Unintuitively, some of the courts that require Parks Permits don't sell them (Central Park does; Riverside Park, 96th St, does; Riverside Park, 119th St, does not). Buying a single-hour pass cost $15 per person per hour in 2014. If you play a lot on Park courts, it's more economical to get a Season Parks Permit, which cost $200 in 2014. The Parks Courts only sell the one-hour passes and—in a stroke of massive idiocy—not a single one sells the Season Pass. This pass is available in late March (most conveniently) at Paragon Sports on 18th St near Union Square. 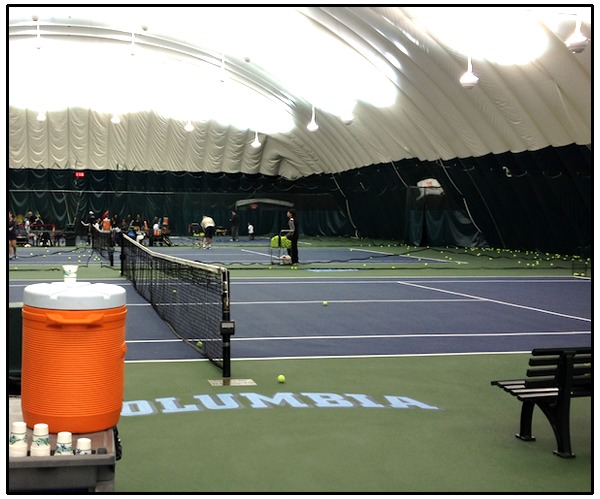 The Dick Savitt Tennis Center is the home of Columbia University's tennis team. The courts are flawless, but it's expensive to rent a court, even if you're affliated with the University. Surprisingly, however, the group lessons are a good deal—and a good way to gain access to these courts. 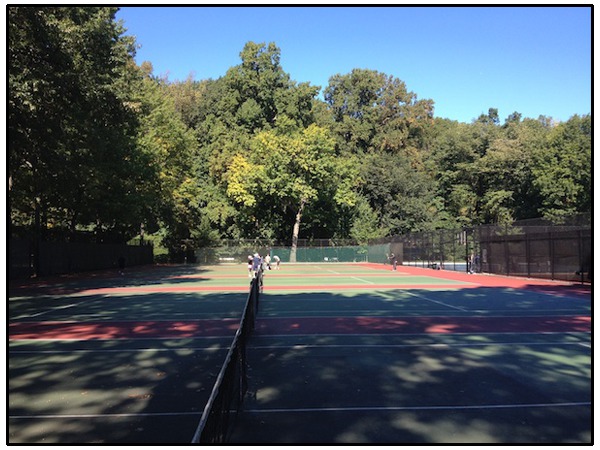 The Inwood Hill Park Courts are one of the few places in Manhattan where, on a beautiful Saturday, you have a chance of walking on with no wait. They're not crowded compared to other spots, on account of their being so far uptown. Of the 9 courts, the 3 in front are usually occupied by Parks Permit holders at peak times; the back 5 are free on a first-come-first-serve basis (sometimes there's a sign up sheet on the door); and 1 court is reserved for a teaching pro. Although there is sometimes an attendant present, he rarely molests you. 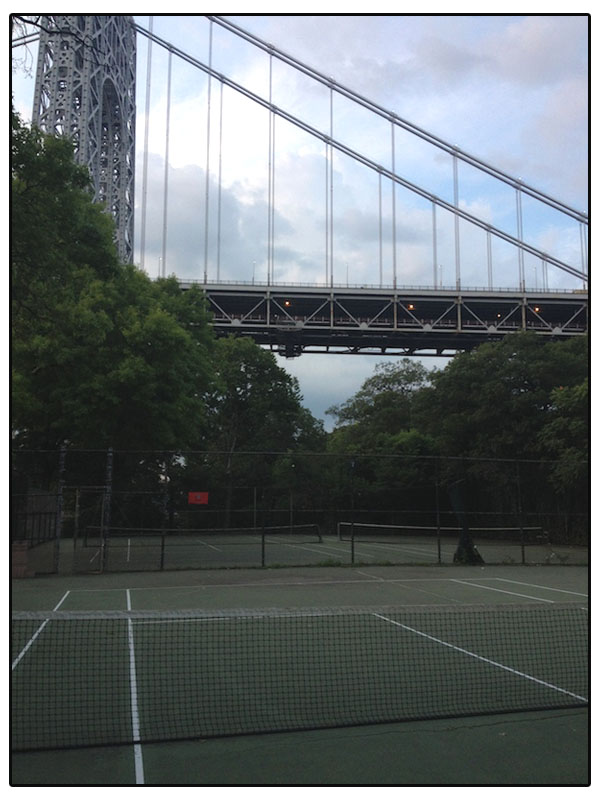 The Fort Washington Park courts are among the worst maintained in the city, but they're plentiful and free (Parks Dept attendants don't patrol here). These courts abut the Hudson River Greenway so, if you're biking, it's all good. However, public transportation doesn't take you anywhere near the courts. If you get off at the 168th St Station, it's at least a 20 minute trek down to the river, involving secluded, forested stretches and a hard-to-spot path along the highway: 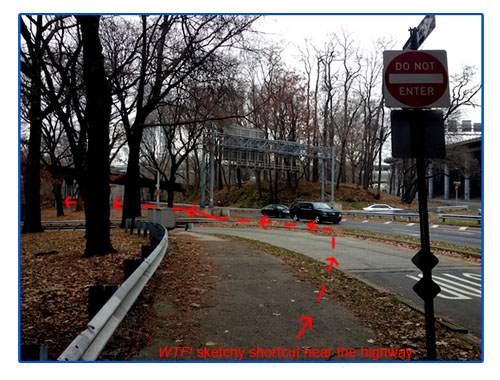 To be more precise, walk west on 165th St. until you hit Riverside Dr. Turn right on Riverside walking north such that you pass NYS Psychiatric Institute on your left. Continue walking until you pass under an overpass and see the scene in the above photo. Then it gets difficult: hook left (west) and find your way to the courts via woodland trails. 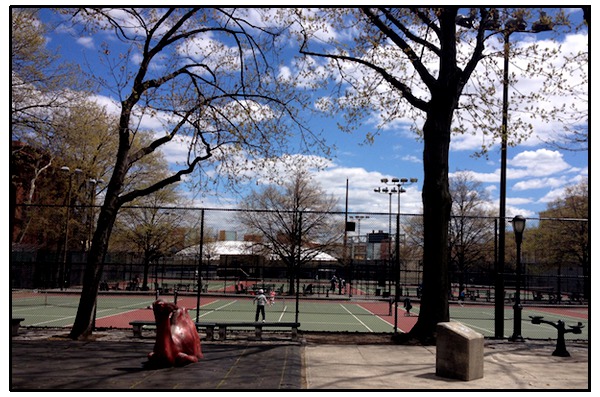 Pros: Excellent quality courts; not crowded; large complex of tennis backboards next to the courts
Cons: Way over on the East Side; not too far from some major urban roadways

I don't have much experience with these courts. I went once on a beautiful Sunday in April—a perfect tennis day—and discovered the double happiness (囍) of open courts and no Parks Dept attendant. The grounds are well-maintained; there are bathrooms; and there's a large complex of tennis backboards next to the courts. 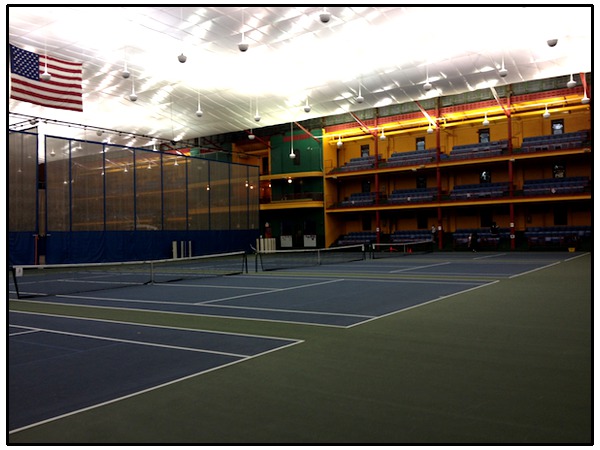 Pros: Affordable, nice indoor courts; ideal for playing in Winter; reservations accepted; open until 10:00 p.m.
Cons: High demand; on the far East Side, served only by the 3 train; a paltry 4 courts
Tips: Know about these courts' existence

The Harlem Armory courts are the cheapest indoor courts in the city, and that makes them a total gem. If you're not rich and want to play tennis during the Winter, this is your best hope. You must register in person (it's free) before you are allowed to make phone reservations or play. 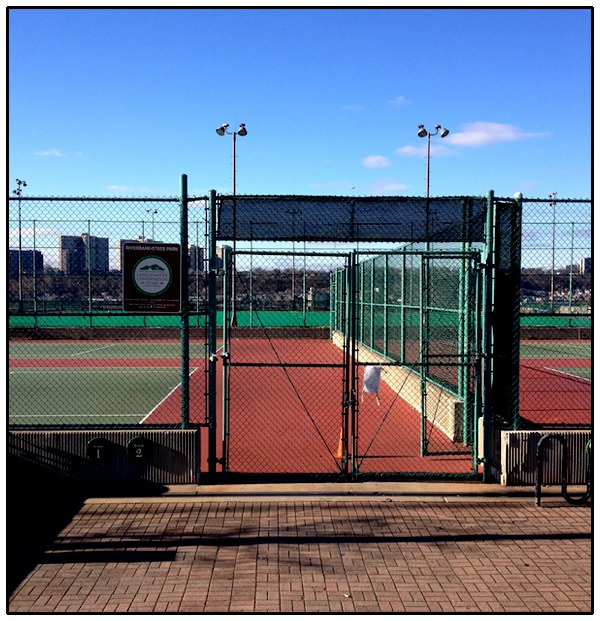 The Riverbank State Park courts are your spot for proletarian tennis. Little known, and built atop a water treatment facility, they're part of the state—not city—park system. Consequently, they're way cheaper. The capricious attendants sometimes check for the specific Riverbank Permit but, more often, do not. I still recommend buying the said pass, as a good-faith gesture, because it only costs around $30 and lasts for the whole season. Also—unfathomable boon!—these are the only outdoor public courts with lights in Upper Manhattan. You can technically make a same-day phone reservation, but they rarely pick up. The default is first-come-first-serve and self-governance (ask politely to take the court if somebody's been hitting for more than one hour). 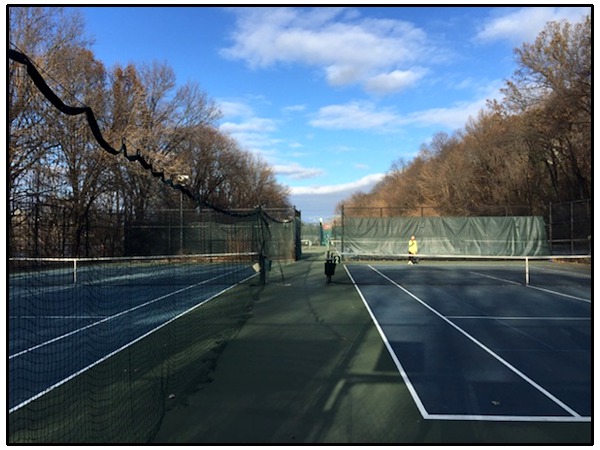 Pros: lovely courts; friendly community of regulars; close to the Columbia University 116th St Station; trees provide a natural wind-barrier and some shade
Cons: High traffic on the weekends; requires, but does not sell, a Parks Permit

The 119th St. Tennis Association courts are located in a wonderful spot in Riverside Park surrounded by lots of tree cover. Although they belong to the Parks Dept, a group of citizen-tennis-activists also looks out for their welfare. There's a modest garden outside, bathrooms, and a bike rack. On beautiful days and weekends, the courts get crowded. Two courts are set aside for the new online reservation system (if you want to pay more) but, otherwise, it's first-come-first-serve. The protocol is, you first take your permit to the attendant and reserve a court (your partner can present his permit right before you play). At peak times this can mean a 1 or 2 hour wait before you get on. You can only reserve a court in person on the same day and no more than 1 hour in advance (unless the next hour is all full, in which case you get the next open slot). Playing at 119th St is usually a way better tennis experience than Central Park. 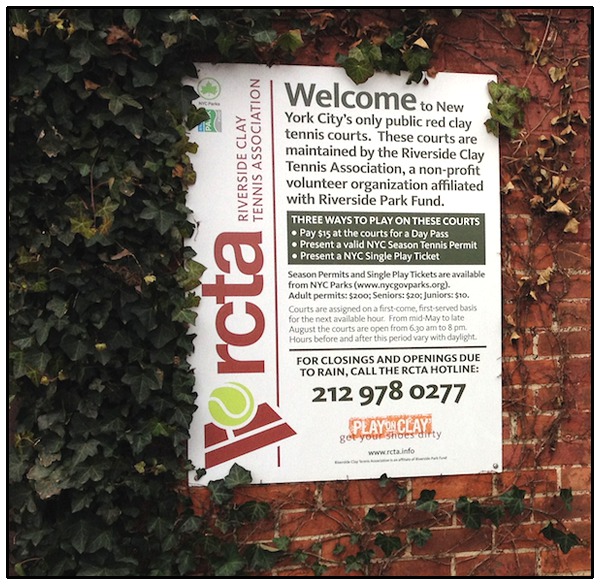 Pros: New York's only public red-clay courts; well-maintained; sells Tennis Permits on site; beautiful spot near the Hudson river; bleachers and hedges
Cons: High traffic; a bit of a hike from the 96th St subway station; you need to sweep the clay when you're finished
Tips: Bike to the courts, via the Hudson River Greenway or Riverside Park; check the web for free concerts on the adjacent lawn during summer; hit up The Boat Basin Café after your match

The Riverside Clay Tennis Association (RCTA) at 96th St has New York's only public red-clay courts, as the sign says. They're right on the river and rack up tons of scenery points, especially in summer. The RTCA lovingly cares for these courts, over and above what the Parks Dept is willing to dole out. Like 119th St, it's a mixature of reservation courts and first-come-first-serve ones. I've found 96th St to be more crowded than 119th St, probably because the RCTA sells Tennis Permits on site, but you can enjoy the riverfront while you're waiting... Commence Roland Garros fantasy! 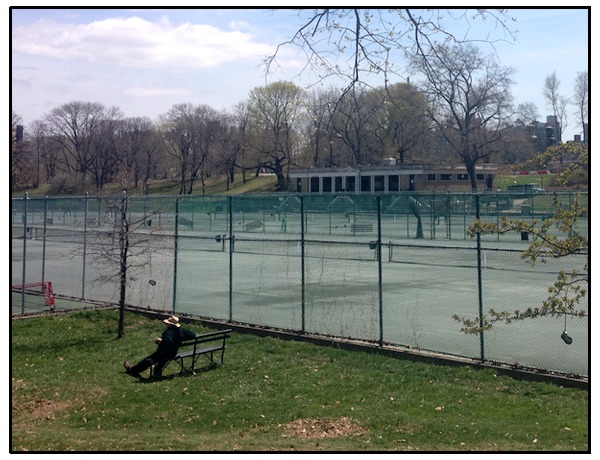 The Central Park Tennis Center has 4 hard courts for lessons, plus 26 gravel (they call it "green clay") courts for public play. Read about Central Park's rules here. I'm not a big fan of the Central Park courts because playing there feels like doing a shift at a factory—get herded onto the courts, loud buzzer, get herded off. If you stay on longer than your allotted hour or use more than 3 balls, you're liable to get yelled at via megaphone. There's lots of competition for these courts and sometimes drama. Another annoyance—they lock the courts up when it rains and can be too lazy to reopen the courts later in the day, even if they've dried out. Aside from my grudges, playing tennis in Manhattan's most storied park can still be pleasant and you should try it at least once.
Advertising