is a powerful text editor that allows you to do almost anything you can dream up in a text file. It has so many commands, you can almost think of it as a text editor-cum-programming language. One of the nicest things about Vim is that it's always available in your terminal. If you use a GUI text editor, like Sublime or Aquamacs, then every time you switch computers, you have to make sure you've installed the program. If you've ssh-ed into a remote server and you're trying to edit a file with one of these GUI text editors, then you have to locally mount the server to edit the file—another headache. If these two reasons aren't compelling enough to switch to Vim, it's also a good editor in its own right. The downside is that Vim isn't the easiest thing to learn, and it sometimes seems geared towards those with a love of the technical. But there is an extensive user manual, a Tips Wiki, and vim.org, which admirably states:

The most useful software is sometimes rendered useless by poor or altogether missing documentation. Vim refuses to succumb to death by underdocumentation.

(The manual weighs in at over 250 pages—mission accomplished!) I've written most of this website in Vim. What follows is a collection of miscellaneous Vim commands—so you know what to expect, it's more a reminder to myself than a carefully crafted article. I'm a firm believer in the basics and that's what you'll find here.

Vim has a bunch of modes. In normal mode, you can navigate through your file and do some simple commands. If you type a colon ( : ) in normal mode, you enter command mode (technically called command-line mode, but not to be confused with the unix command line) where you can enter syntactically more complex commands at the prompt. In insert mode you can edit text and in visual mode you can highlight text. Vim visual mode has 3 sub-modes: Here's how to toggle into the various modes, from normal mode:


Here's how to get back to normal mode from another mode:


Some people also map jj to Esc (you can see how to do this in the .vimrc included below).

For the remainder of this article, I'll put a colon in front of any command executable from command mode, as it would appear at your Vim prompt.

Saving and Quitting in Vim


Navigating Through Your File in Vim


Many of these are useful in visual mode, too. If you're pasting text into your Vim editor from the outside world, it's sometimes necessary to use the special paste mode: If you don't set this, Vim can trip up on special characters or mess up your indentation. To turn it off: Suppose you yank a word (yiw) and then delete a line (dd). Now you can't paste the word you yanked because, to use a Mac analogy, the line has superceded the word in your clipboard: if you you paste (p), you get the line. How do we get around this? Vim is not limited to merely copying one thing but, instead, has multiple registers in which to store information. You can see their contents: If your last command was delete or yank, whatever you operated on goes into the default register. However, you can always access the other registers by name. For example, yank puts its contents into both the default register and the 0 register. Hence you can always paste what you last yanked with "0p even if, say, you've deleted stuff since then.

Undoing, redoing, and repeating the previous command (in normal mode):

In Vim you can work on multiple files at once, which means you can copy and paste things from one file to another without ever quitting the editor. In command mode:


As we noted above, Cntrl-o and Cntrl-i will jump to cursor positions across files. One more interesting command, in normal mode:


Jumping Back to the Command Line Without Quitting Vim

Happily, we can jump back to the command line without quitting Vim (in normal mode):

A powerful feature in Vim is the ability to use unix utilities without leaving the editor. System commands are prefixed by the ! symbol. Try typing this into your Vim editor: Go into Visual Block mode and select them. Let's try using unix cut: Just as if we were cutting a file on the command line, we get: Another example: This would sort on the 5th column of the selected rows.

To change the case of your text characters, select those characters in visual mode and use:

Finding and Replacing Text in Vim

To find text in Vim, type a slash ( / ) in normal mode. To find findthistext, for example:
/findthistext
To step through each instance, it's:


in normal mode. Happily, unix less also shares this syntax for find. In Vim, we can also find characters on a single line:


In command mode, we can do a global substitution of findtext with replacetext: Once Vim has found text, it will highlight it. To turn off highlighting: A familiar task when writing HTML is replacing the reserved character > with its code &gt;. We can do this easily is Vim: Yet this would replace all such > characters in our file. Since this would mess up our HTML tags, it's more likely we want to do this in a local region, say lines 10 to 20: Another way to do this is by calling a system command like sed:

As we've seen, we can use system tools within Vim and this includes awk. Let's say we have the following list to which we want to add HTML list tags, <li> </li>: Go into Visual Block mode and select these words. Now try: This produces:

Sometimes you want to add or remove tabs from the beginning of a bunch of rows. This works in normal mode and especially well in visual mode:


Another nice ability is putting two rows on the same line:

The Verb Preposition Object paradigm is one of the most powerful Vim features. The basic idea is that in normal mode you enter three letters, which represent an action, the scope of that action, and the object which that action acts upon. It's best illustrated by example:


You can mix and match these as you like. For example, if we had: Then entering di" anywhere inside the quotation marks produces:

In Vim you can add characters to multiple lines simultaneously. This is useful if, say, you want to comment out multiple lines. To use this feature, first enter visual block mode and select the lines you want to edit. For example, here I'm selecting lines 2 through 4: 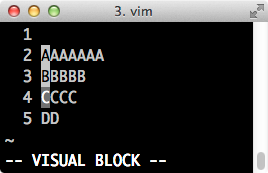 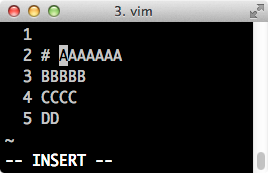 To apply this to all lines, hit Esc Esc: 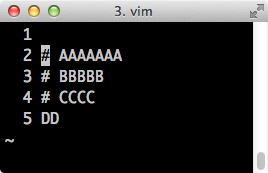 And we're done! Note if you wanted to write something at the end of every line, the recipe would be: enter visual block mode; scroll up or down to select the lines you want; type $; type A; enter your text; type Esc Esc.

If we have to repeat the same sequence of commands frequently, it gets tiresome. You can automate this in your current Vim session using a macro. To use a macro, type q followed by any character in normal mode. Then write your commands. When you're finished, return to normal mode and press q again. To elicit your macro, type @ followed by the character you choose.

Let's see an example. Since I'm writing HTML code, a recurring task is putting things in <i> tags to make them italic. This is a pain to do by hand, so let's automate it in a macro I'll call @i. Here's the Vim, step by step:


Now anytime our cursor is in the middle of a word, we need only press @i in normal mode and italic tags will appear around it. Cool, eh? However, this is only for the here and now. What if we want to make sure this macro is saved for all time or use it on other computers? If that's the case, we can put it in our .vimrc (which we'll discuss below): How do we get this without retyping everything already stored in our macro? We can see our macros by entering: Note: you need to be extra careful copying from this list—say with ⌘c on Macintosh—because of how the escape character is represented. To write the escape character, we have to use Control-v Esc. This produces ^[ which is NOT THE SAME as simply typing a ^ character followed by a [ character! The ^[ here is one character, not two, and Vim will color it to remind you of this fact. However, if you just copy it, you'll end up with the two characters, which is not the escape character.

pathogen.vim makes it easy to install Vim plugins. For details, go here:
https://github.com/tpope/vim-pathogen
As described in the link, download it like this:

With pathogen installed, we can install some useful Vim plugins. tcomment allows one to comment out multiple lines at once: nerdtree pops up a directory menu on your left sidebar:

A neat Vim trick is the ability to access the HTML source code of a website from the terminal: Hat tip: Albert

Use Vim on the Web in Chrome with Wasavi

Wasavi is a "vi editor for any web page" plugin for the Chrome browser, which allows you to do stuff like use Vim inside Gmail.

Here's a sample .vimrc configuration file. If you put this in your home directory, Vim will add its rules:

Update: Get my current .vimrc on GitHub. Or check out grepinsight's. Note: comments are prefixed with a quotation mark ( " ).

Making a Function in Vim for 4-space Python Indentation

You can make your own functions in Vim and put them in your .vimrc. Do you use Python? The official docs say: "Use 4 spaces per indentation level." But a tab is usually 8 spaces, not 4, so how can we conveniently get our half-tab without having to bang the space bar a million times? This function allows the user to toggle between 8- and 4-space tabs by pressing Leader 4 in normal mode (Leader is \ by default):
Advertising